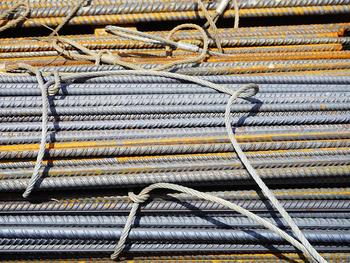 Wear, corrosion, material fatigue - these signs of degradation are common to most materials. This makes it all the more important to detect damage early, preferably on the micro scale. Magnetic test methods are often used for this purpose, which was previously impossible with non-magnetic steel. Researchers from Kaiserslautern and Mainz have now developed a process in which they apply a thin magnetic layer to steel. Changes in the microstructure can thus be detected by changes in magnetic effects. Materials such as aluminum can also be tested in this way.

Steel is one of the most frequently used materials. It is used in many variants, for example as stainless steel, high-strength quenched and tempered steel or low-priced structural steel. Steels can be magnetic or non-magnetic. They are used in cutlery, in vehicle components or in steel girders of buildings and bridges. Sometimes steel is exposed to high temperature or stress. “This can result in microstructural changes, cracks or component failure,” says Dr. Marek Smaga, who is a researcher at the Department of Materials Science under Professor Dr. Tilmann Beck at the Technische Universität Kaiserslautern (TUK). Experts speak in this context of material fatigue. Such damage is initially only visible at the micro level. With magnetic testing methods, however, it is not yet possible to detect changes in this scale in non-magnetic steel at an early stage.

Engineers from the TUK and physicists from the Johannes Gutenberg-University Mainz (JGU) are working on this and are presenting a solution to their current study. What is special: They make use of magnetic effects even though they deal with non-magnetic material. “With magnetic steel, it is possible to find changes in the structure early on,” explains the doctoral student from Kaiserslautern Shayan Deldar. “Even tiny deformations change the magnetic properties. This can be measured with special sensor technology.”

The researchers have coated a non-magnetic steel with different magnetic films, each 20 nanometer thin, consisting of terfenol-D, an alloy comprising the chemical elements terbium, iron and dysprosium, or permalloy, a nickel-iron compound. The researchers then used a so-called Kerr microscope to check whether strains of the steel can be detected in the microscopic range. “This is achieved using the so-called Kerr effect,” explains Smaga, “which allows the magnetic microstructures, the so-called domains, to be imaged by rotating the polarization direction of light.”

The scientists examined magnetically coated steel plates that were previously exposed to mechanical load. “We observed a characteristic change in the magnetic domain structure,” explains Dr. Martin Jourdan from the Institute of Physics at the Johannes Gutenberg University in Mainz. “Microscopic strain in non-magnetic steel causes the direction of magnetization of the thin layer to change.”

Compared to conventional test methods, this method has the advantage of detecting signs of fatigue much earlier at the micro level. The researchers' method could be used in new testing techniques in the future. Moreover, it is not only interesting for non-magnetic steel, other materials such as aluminum, titanium and certain composite materials could also be provided with such a layer.

The work took place within the framework of the Collaborative Research Centre “Spin+X - Spin in its collective environment”, which is located at the TU Kaiserslautern and the JGU. Here, research teams from chemistry, physics, mechanical engineering and process engineering are working interdisciplinary on magnetic effects that are to be transferred to the application. The focus is on the spin. In the language of physics, spin describes the quantum mechanical momentum of a quantum particle, such as an electron or proton. It forms the basis for many magnetic phenomena.