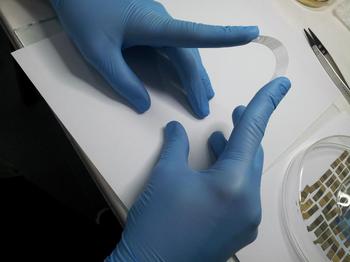 Superconductors' never-ending flow of electrical current could provide new options for energy storage and superefficient electrical transmission and generation. But the signature zero electrical resistance of superconductors is reached only below a certain critical temperature and is very expensive to achieve. Physicists in Serbia believe they've found a way to manipulate superthin, waferlike monolayers of superconductors, thus changing the material's properties to create new artificial materials for future devices. This image shows a liquid phase graphene film deposited on PET substrate.

Superconductors' never-ending flow of electrical current could provide new options for energy storage and superefficient electrical transmission and generation, to name just a few benefits. But the signature zero electrical resistance of superconductors is reached only below a certain critical temperature, hundreds of degrees Celsius below freezing, and is very expensive to achieve.

Physicists from the University of Belgrade in Serbia believe they've found a way to manipulate superthin, waferlike monolayers of superconductors, such as graphene, a monolayer of carbon, thus changing the material's properties to create new artificial materials for future devices.

"The application of tensile biaxial strain leads to an increase of the critical temperature, implying that achieving high temperature superconductivity becomes easier under strain," said the study's first author from the University of Belgrade's LEX Laboratory, Vladan Celebonovic.

Conductivity depends on the movement of electrons, and although it took seven months of hard work to accurately derive the math to describe this movement in the Hubbard model, the team was finally able to theoretically examine electron vibration and transport. These models, alongside computational methods, revealed how strain introduces critical changes to doped-graphene and magnesium-diboride monolayers.

"Putting a low-dimensional material under strain changes the values of all the material parameters; this means there's the possibility of designing materials according to our needs for all kind of applications," said Celebonovic, who explained that combining the manipulation of strain with the chemical adaptability of graphene gives the potential for a large range of potential new materials. Given the high elasticity, strength and optical transparency of graphene, the applicability could be far reaching -- think flexible electronics and optoelectric devices.

Going a step further, Celebonovic and colleagues tested how two different approaches to strain engineering thin monolayers of graphene affected the 2D material's lattice structure and conductivity. For liquid-phase "exfoliated" graphene sheets, the team found that stretching strains pulled apart individual flakes and so increased the resistance, a property that could be used to make sensors, such as touch screens and e-skin, a thin electronic material that mimics the functionalities of human skin.

"In the atomic force microscopy study on micromechanically exfoliated graphene samples, we showed that the produced trenches in graphene could be an excellent platform in order to study local changes in graphene conductivity due to strain. And those results could be related to our theoretical prediction on effects of strain on conductivity in one-dimensional-like systems," said Jelena Pesic, another author on the paper, from the University of Belgrade's Graphene Laboratory.

Although the team foresees many challenges to realizing the theoretical calculations from this paper experimentally, they are excited that their work could soon "revolutionize the field of nanotechnology."