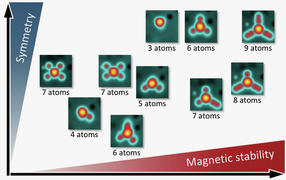 Being able to arrange individual atoms systematically on a surface has nowadays become routine for researchers. However, being able to use them as tiny magnetic data storage devices for computers is still a long way off. If this could be achieved, it would bring with it enormous advantages: more data could be stored in a smaller space and processed faster and with less energy consumption. Nevertheless, it is not yet clear how magnetic information can be stored long enough in individual atoms or how it can be read out without affecting their stability.

Studies undertaken by researchers from Hamburg, Jülich and Leiden in the Netherlands now show that the magnetic stability of atomic storage can be increased by more than an order of magnitude if the positions of the atoms are optimally selected. In addition, they discovered a way of retrieving the information not directly from the storage atoms but via neighbouring atoms, thereby maintaining the magnetic stability of the storage array.

The main discovery of this joint theory-experiment investigation is that a highly symmetrical arrangement of all the atoms is the key to improved stability. This was demonstrated by studying the influence of individual iron atoms on the magnetic stability of groups of three iron atoms on a platinum surface. Using a spin-polarized scanning tunnelling microscope at the University of Hamburg, the position of the individual atoms could be systematically changed. Depending on the number, distance and position of the additional atoms surrounding the central trimer, the magnetic stability of the latter changed in a way that initially surprised the researchers.

"Additional satellite atoms and the resulting extension of the magnetic cluster should have intuitively improved stability. But in many measurements the opposite was the case", explains Sascha Brinker, PhD student at the Institute for Advanced Simulation and the Peter Grünberg Institut in Jülich. Extensive calculations made using the Jülich supercomputer JURECA finally showed that the additional atoms only strengthen the magnetic stability when they maintain the high symmetry of the trimer. This suppresses the symmetric anisotropic magnetic interaction, which has been mostly unexplored up to now, and which otherwise has a detrimental effect. The better-known isotropic magnetic interaction makes it possible to read out magnetic information via the satellite atoms.