Big award for the development of artificial photosynthesis

Research award and one million euros 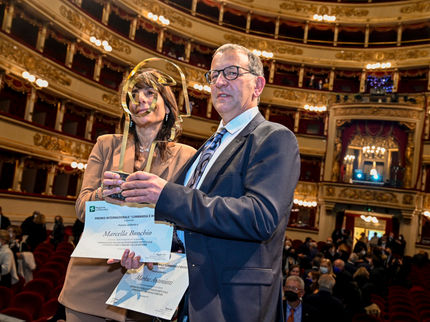 As one of three award winners, Markus Antonietti receives the international research prize "Lombardia è Ricerca", endowed with 1,000,000 euros, at La Scala in Milan. The researchers have developed a process for clean energy production using "artificial photosynthesis" modeled on nature.

We humans produce more carbon dioxide than plants and algae can use. “Artificial photosynthesis" now offers the chance to redress this ecological imbalance and generate clean energy, in particular green hydrogen. For this process, Markus Antonietti and his international colleagues have studied, mimicked and further developed the mechanisms of natural photosynthesis.

The contribution of Markus Antonietti, Director at the Max Planck Institute of Colloids and Interfaces, and his collaborators lies in the development of inexpensive and sustainable catalysts. They are used in "artificial photosynthesis" and can convert the energy of sunlight into molecular processes that are otherwise only known from biology. Oxygen and fuel molecules such as ethanol are obtained from water and carbon dioxide in this way. "The carbon dioxide fixation of our process is already much higher than that of trees," says Markus Antonietti, adding, "In joint EU projects with our Italian partners, we envision fuel molecule productivities of 300 tons per hectare."

The photocatalysts from Markus Antonietti's research consist of polymeric carbon nitrides. These are a yellow powder derived from simple molecules such as urea. Like plants, they use sunlight to synthesize sugars, fuels or useful chemicals, but more efficiently and with a single, robust and environmentally friendly material. For this achievement, Antonietti now receives the "Lombardia è Ricerca" award together with Marcella Bonchio and Pierre Joliot. "This prize also brings our sustainable research, which is so important for the future, to the attention of a wider public," says Markus Antonietti. "There are some very promising options for responding to the climate crisis, but they are not discussed publicly. That's why this award is important to me," he explains. Together, the award winners have worked in different research areas to understand and artificially maximize the efficiency of photosynthesis.

Since 2017, the "Lombardia è Ricerca" research prize has been awarded for the best scientific findings in the field of natural sciences. The jury consists of 15 top international scientists. Markus Antonietti is the second winner from Germany.