From the packet into your food: what harmful substances are in food packaging? 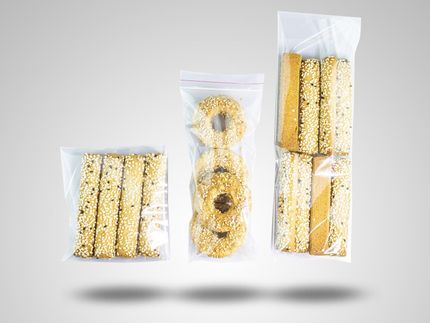 Salad boxes to go, sealed-tray lasagna and apple juice in PET bottles: we encounter packaged food and drink everywhere. A new database shows which packaging contains harmful substances that can be transferred to its contents. It also includes findings from researchers at the University of Basel, who are investigating plastic molecules that were previously unknown or barely known.

More than 3,000 detected chemicals are listed in the Food Packaging Forum's database. An international team of experts oversaw the execution of this multi-year project and contributed to the creation of a database of previously undocumented chemicals that can enter food through packaging.

These include what are known as oligomers, molecules made up of several building blocks (monomers) used in the production of plastics and which are formed as by-products in the process. The listing of oligomers in the database was supported by Dr. Verena Schreier and Professor Alex Odermatt from the Department of Pharmaceutical Sciences at the University of Basel. The two molecular and systems toxicologists study plastics and the harmful substances they contain that unintentionally end up in food and drink.

The major problem with these substances: “It’s difficult to look for them because they aren’t deliberately added – they are unexpected by-products,” says Odermatt. As a result, he says, it’s also not clear in what concentration they are present in plastics and whether they can be released. Accordingly, the plastics are not tested for these substances and the safety of the substances themselves has not yet been assessed. But the database is set to change this.

Oligomers in food and drink packaging

A well-known example is polyethylene terephthalate (PET), which is often used as a packaging material. “There are about 50 oligomers in PET that have been detected in products so far,” says Odermatt. With his research in the ToxOligo project, which is supported by the federal government, Odermatt and his team want to increase awareness of these particular substances and their effects.

Many of these oligomers are found in packaging and thus come into contact with food and drink, which is how they end up in the human body. “Many of these substances have already been detected in humans,” says Odermatt. Although the EU’s REACH regulation (Registration, Evaluation, Authorization and Restriction of Chemicals) serves as a political basis for dealing with chemical substances, it only takes effect when the substances and corresponding testing systems are known. “After that, it’s up to the industry to ensure that only harmless substances end up in food packaging,” says Odermatt.

The toxicologist is not surprised by the findings so far: “It’s always the case that new products are launched before their safety is confirmed.” This is precisely why it’s so important to identify these by-products and breakdown products, so that they can be better dealt with, he says.

In the case of plastic oligomers, it has often also been technically impossible to detect them. For this reason, Odermatt’s team is working closely with the Computational Pharmacy group at the department to run computer simulations before they start in vitro tests.

Clarifying the effect on health

“With our project, we are still at the very beginning of discovering how oligomer substances act,” says Odermatt. Until now, it has been assumed that these behaved in the same way as monomers. “The assumption was that because they are larger molecules, it’s harder for them to enter the human body, or they are rapidly broken down into their monomers in the body – but this hasn’t been proven yet.”

In the medium term, the goal is clear: “Plastics containing substances that are harmful to health may no longer be used,” says Odermatt, since they could accumulate in the body or reinforce each other. The researchers also receive support for their work from the manufacturers of these substances: “The industry is aiming for recyclable or biodegradable products.”

Meanwhile, the new FCCmigex database is continuing to gather information on chemical substances that come into contact with food and drink. So far, 1,976 different chemicals have been detected in plastics, as the researchers’ article, published in the journal Critical Reviews in Food Science and Nutrition, notes.