Quantum material as a terahertz booster 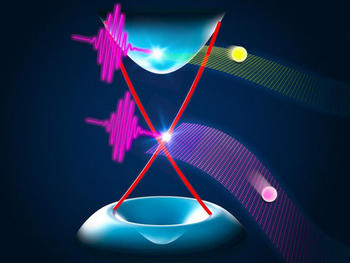 They are considered to be highly interesting materials for the electronics of the future: topological insulators conduct electricity in a special way and promise novel circuits and faster mobile communications. A research team from Germany, Spain and Russia, led by the Helmholtz Centre Dresden-Rossendorf (HZDR), has now unravelled a fundamental property of the new class of materials: How in detail do the electrons in the material react when they are "startled" by short pulses of so-called terahertz radiation?

The results are not only important for the fundamental understanding of these novel quantum materials, but could also provide faster mobile data communication in the future or be used in highly sensitive detector systems for the exploration of distant worlds, as the team reports in the journal NPJ Quantum Materials.

Topological insulators are a still young class of materials with a special quantum property: on their surface they can conduct electricity almost without loss, whereas their interior acts as an insulator - no current can flow here at all. This promises interesting prospects for the future: topological insulators could serve as the basis for highly efficient electronic components, making them an interesting field of research in physics.

However, there are still some fundamental questions to be answered: For example, what happens when the electrons in the material are "nudged" with certain electromagnetic waves - so-called terahertz radiation - and thus energetically excited? One thing is clear: the electrons want to get rid of the forcibly missed energy boost as quickly as possible, for example by heating up the crystal lattice around them. But in the case of topological insulators, it was previously questionable whether this release of energy happens faster in the conducting surface than in the insulating core. "To determine this, there has been a lack of suitable experiments," explains study leader Dr. Sergey Kovalev from the Institute of Radiation Physics at HZDR. "Until now, it has been extremely difficult to distinguish between the reaction of the surface and that of the interior of the material at room temperature."

To overcome this hurdle, he and an international team developed a sophisticated experimental setup: Intense terahertz pulses strike the sample and excite the electrons. Immediately afterwards, laser flashes illuminate the material and record how the sample reacts to the terahertz stimulus. In a second series of experiments, special detectors measure the extent to which the sample exhibits an unusual nonlinear effect and multiplies the frequency of the incoming terahertz pulses. Kovalev conducted these experiments at the TELBE terahertz light source in the ELBE Centre for High Power Radiation Sources at the HZDR. Researchers from the Catalan Institute of Nanosciences and Nanotechnology in Barcelona, the University of Bielefeld, the German Aerospace Center (DLR), the Technical University of Berlin as well as the Lomonosov University and the Kotelnikov Institute of Radio Engineering and Electronics in Moscow were involved.

The decisive factor here was that the team did not examine just one material. Instead, the Russian project partners produced three different topological insulators with different, precisely tuned properties: in one, only electrons on the surface could directly absorb the energy of the terahertz pulses; in the others, mainly electrons inside the sample were excited. "Matching these three experiments allowed us to distinguish precisely between the behavior of the surface and that of the interior of the material," Kovalev explains. "Namely, the electrons in the surface excited much faster than those in the interior of the material." Apparently, they were able to transfer their energy immediately to the crystal lattice of the material.

In numbers: If the surface electrons had returned to their original energetic state after a few hundred femtoseconds, this took about ten times as long for the "inner" electrons, i.e. a few picoseconds. "Topological insulators are highly complex systems, they are anything but simple to understand theoretically," emphasises Michael Gensch, former head of the TELBE facility at HZDR and now head of department at the Institute of Optical Sensor Systems at DLR and professor at TU Berlin. "Our results can help decide which of the theoretical ideas are applicable."

But the experiment also promises interesting prospects for digital communications, such as WLAN and mobile communications. Technologies such as 5G today operate in the gigahertz range. If higher frequencies in the terahertz range could be used, significantly more data could be transmitted over one radio channel. So-called frequency multipliers could play an important role here: They are able to translate relatively low radio frequencies into significantly higher ones.

Some time ago, the research team realized that graphene - two-dimensional, super-thin carbon - can serve as an efficient frequency multiplier under certain conditions. It is capable of converting a 300-gigahertz radiation into frequencies of a few terahertz. The problem is that if the incoming radiation is extremely intense, graphene loses a lot of efficiency. Topological insulators, on the other hand, still work even under the most intense excitation, the new study found. "This could make it possible to multiply frequencies from a few terahertz to several dozen terahertz," believes HZDR physicist Dr. Jan-Christoph Deinert, who leads the TELBE team together with Kovalev. "So far, we don't see an end there for topological insulators."

This means that the new quantum materials could be used in a much wider frequency range than graphene, for example. "At DLR, we have a great interest in using such quantum materials in powerful heterodyne receivers for astronomy, especially in space telescopes," Gensch explains.